Summer in the Gorge

For the last four weeks, since we returned from the BMW Rally in Iowa, Ash and I have been here at home in the Gorge. This is the longest uninterrupted stretch of summer we’ve had at home in several years, and it has been awesome. It ends this afternoon, when we leave for two weeks in Black Rock City, Nevada for Burning Man. After that, we’ll return to Washington for a few days to unpack, un-dust, and reload the trailer with bikes and samples for the annual KTM Rally in Park City, Utah.

We got the latest round of apparel samples and they look really awesome. It has been so satisfying to watch Scott Bryan take over leadership of this project. Each new round of samples represents a big improvement over the last. We’re still driving toward a 2019 product launch.

For the latest round, we applied ceramic SuperFabric armor directly onto the high-abrasion waterproof/breathable eVent fabric we’re using for the main body of the jacket. In other words, everywhere you see the color blue in the samples below, is actually two overlapping layers of high-abrasion eVent fabric with SuperFabric armor dots on top. If you’re not familiar with SuperFabric, check out their website here. We originally had the SuperFabric on a 600d underlayer, but after tearing up the knee patches on some testing samples (from snagging, not abrasion), we decided it had to change.

We’re loving the new construction. It’s extremely tough in the areas that take a beating when you go down, but light and breathable everywhere else. The only problem is that it creates some major challenges on the supply side, by doubling the material lead time and nearly doubling the cost per yard. First the eVent fabric has to be made and laminated, then it has to be sent to SuperFabric to have the armor applied, and then finally it has to be sent to our sewing factory to be assembled into a garment. Plus eVent is a lot more expensive than 600d base we were using before. There’s a reason more people aren’t doing things this way. Scott is looking for a solution. 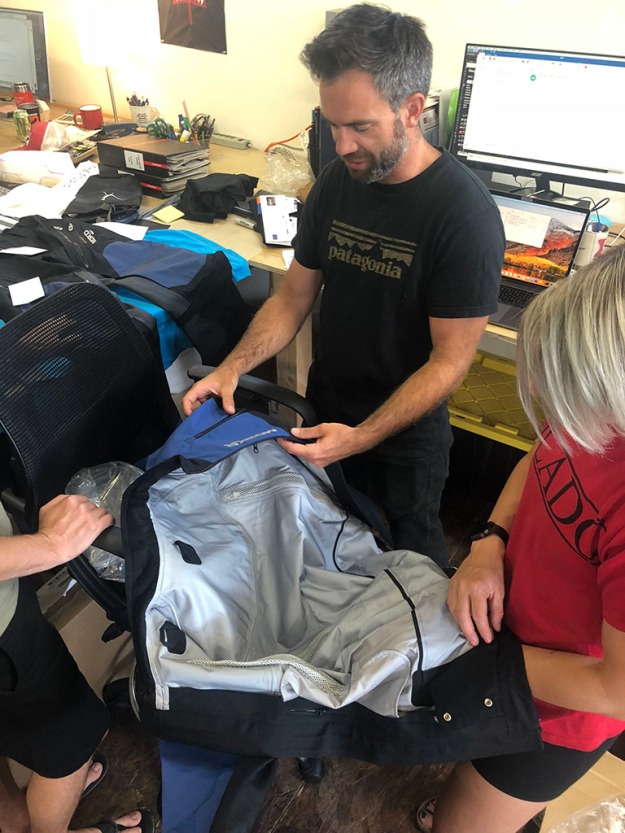 We’ve been experimenting with different threads that have a very high breaking strength. 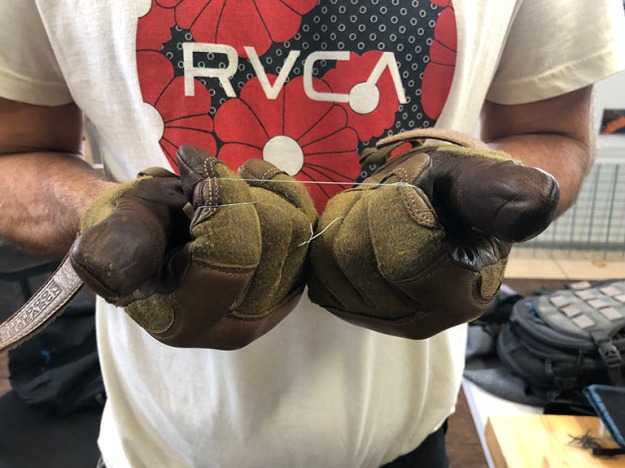 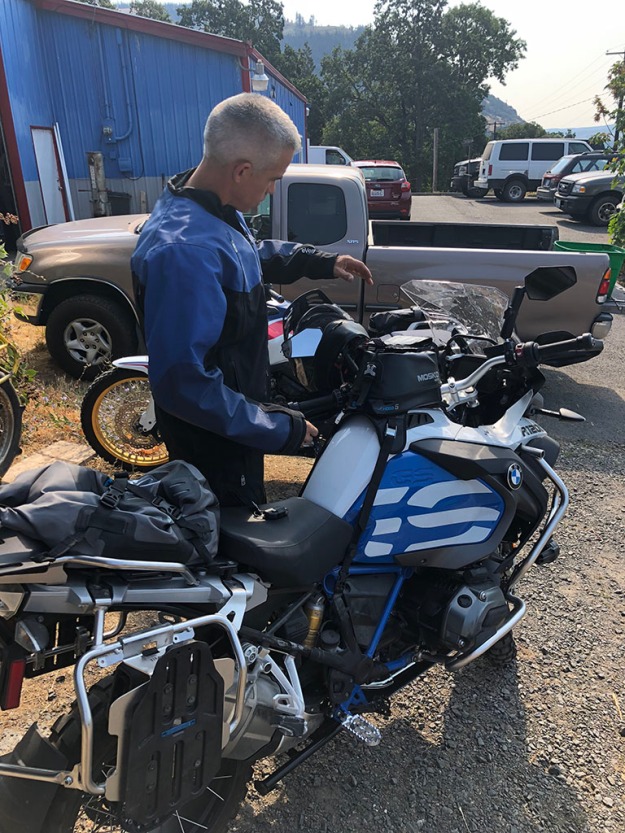 I took the new gear out for a test ride up to Mount St. Helens last week. I also took the new Hood tank bag, which fits perfect on our R1200GS Adventure, and a prototype of our new MOLLE cell phone holder.

The Basilisk pants will come with this really nice custom leather belt. You’d think belt sizing would be pretty straightforward, but it’s actually not. Belt sizes run about two inches longer than waist sizes – which is confusing when you’re trying to decide which size to buy – and there’s the question of how many holes, which holes to measure the sizing from, and what ranges of waist sizes each belt should cover. Plus the belt sizing needs need to match our pant sizing.

The belts look great. Everyone wants Scott to finish so we can fight over who gets the samples. 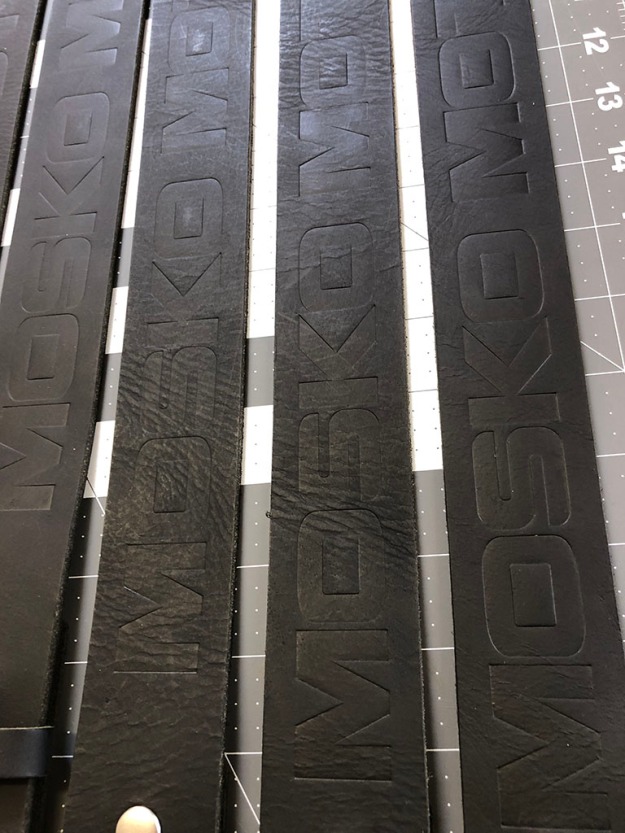 The size XXL sample was enormous for some reason. There was a huge leap from XL to XXL, much bigger than the leap in our pant sizing. 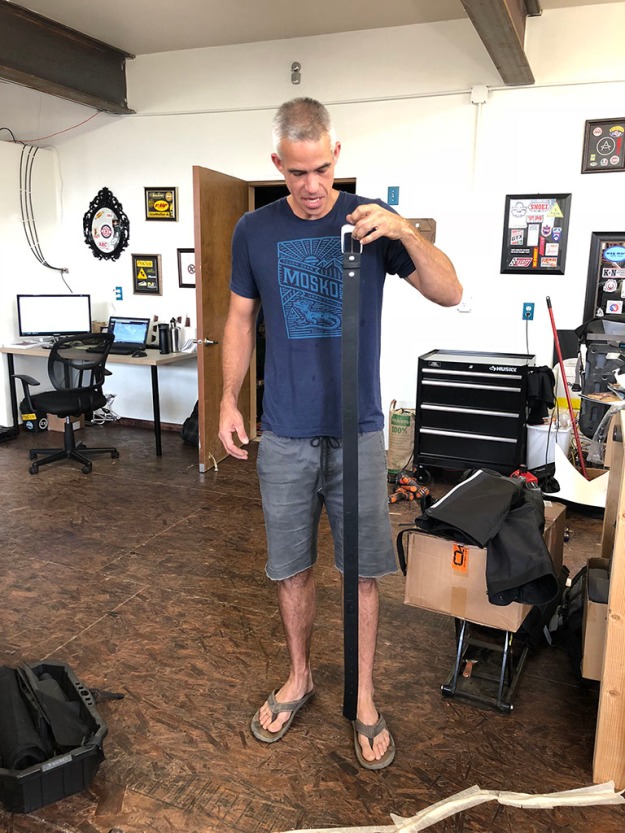 The lines in the pic below represent the top position of my knee armor in a standing versus sitting position. It’s a huge difference.

Really digging the final label artwork by Dan Cox Design. We’ve already incorporated some of this into t-shirts.

Ken Strode from LGL Studios came to town yesterday to create new product beauty shots for our upcoming catalog. Ken is also a rider, he has a Nomad Tank Bag, Backcountry 35 Panniers, and a Backcountry 40 Duffle on his Africa Twin. Ken & Ash took over the Mosko shop from 6am until well after dark. Now Ken has the raw images he needs for post-production editing, clipping, and drop-shadowing. Product beauty shots are a lot of work. 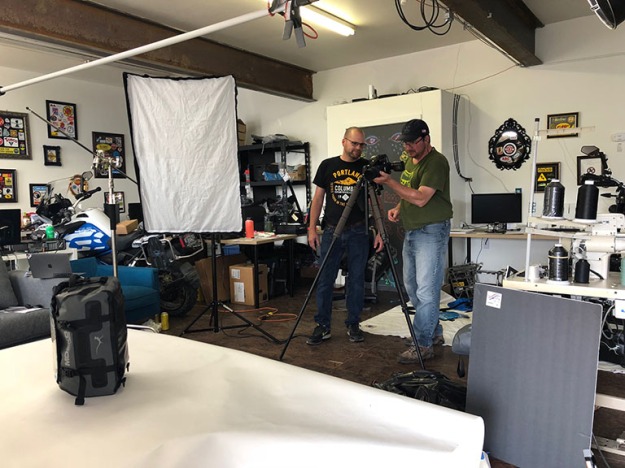 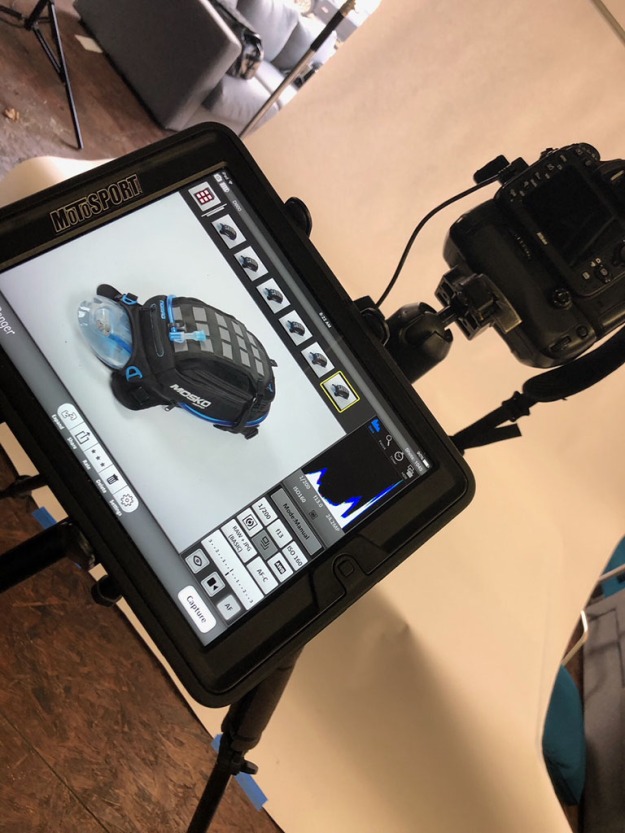 This shot cracks me up. Ken & Ash are photographing our new super-lightweight hi-tech poop trowel, which should be ready any day now.

Thanks so much for all the hard work Ken. That was a long day. It was a pleasure watching you work.

If you’ve been trying to order a Reckless 80, Fatty Tool Roll, or Scout panniers, or if you’ve been patiently waiting on new products like the Reckless 10, Hood Tank Bag, Pico, or Pinner, then you may have noticed we’re having some supply issues.

The issues originated back in January-March. Winter sales were a lot higher than forecast, leaving us short on inventory. We saw the problem and responded by placing rush restock orders with our two main factories, one for sewing and one for fabric welding (ie for drybags). Many of our bags – like the Reckless 80 for example – have both sewn-seam and welded components in them.

The sewing order showed up on time, but not the welding order. We had a problem with  the manufacturer of our drybag fabric. This is the custom polyurethane fabric with the blue interior that we switched to last year. We had to find a new source for, which meant making and approving new samples, which takes time.

Now it’s been 7 months since we placed the ‘rush’ order – compared to a normal lead time of 4 months – and we’re still waiting. The fabric is made, and sewing should be finished around September 18th. Then the product will be in containers on the water for another 3-4 weeks, putting the expected arrival date out into October. Hopefully we will be able to get some partial deliveries via air freight before then.

With the new supplier up and running, we hope the supply issues are behind us. We also changed the way we forecast and reorder to be more responsive to changes in demand. If you’ve been affected by the stockouts, sorry! We’ll do everything we can to prevent this from happening again.

We’ve had several great days of singletrack at Mt. Adams. This is Alistair Nicol in the pics below, he works with Ash to manage Mosko’s Facebook and Instagram. He’s riding with a Reckless 40 on his 250. 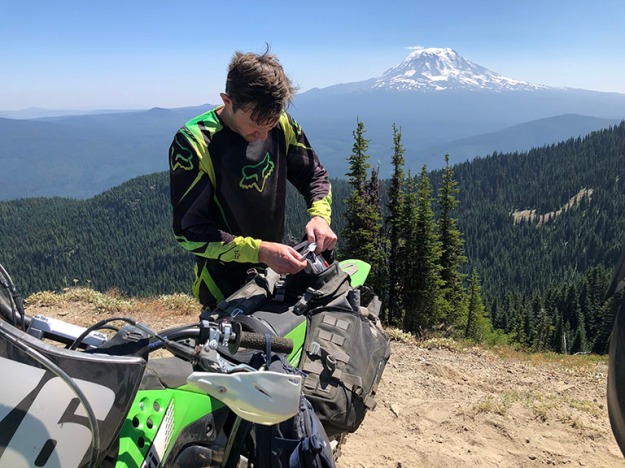 Ash & I went to our local gas station to fill up, and ran into this group of really cool & stoked Mosko riders, at least three of whom were named Brian. Awesome to meet you guys!

I love seeing the ways that people use their MOLLE panels.

Dane Pedersen also stopped by last week. He’s been exploring North America and living off his R1200GS for the last three months with a Reckless 80 and Nomad. 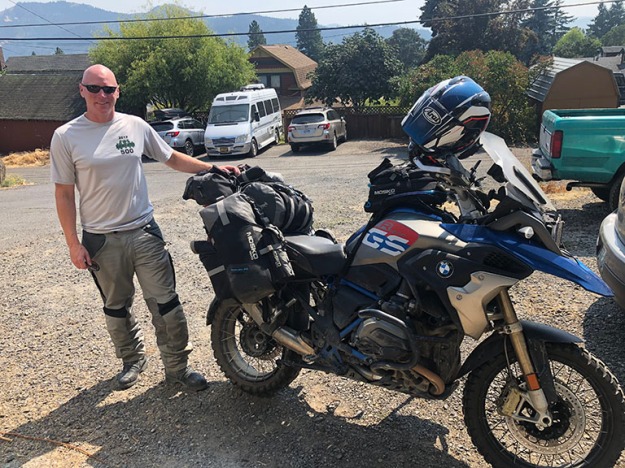 Speaking of the Nomad, anyone who received one recently may have noticed the new Mosko-branded hydration reservoirs from Platypus. The new ones have a wide top-opening, so you can add ice on hot days. We also added a shutoff switch on the bite valve. 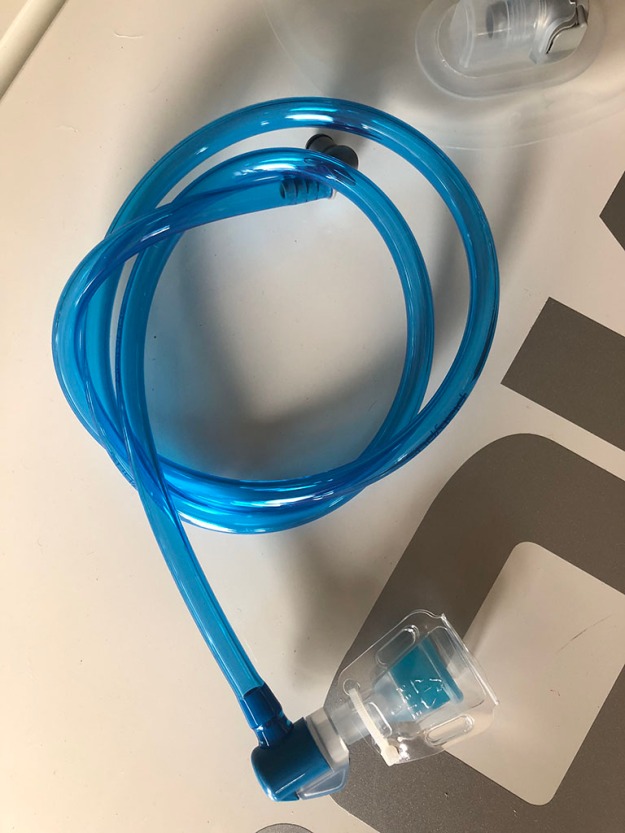 Our summer intern Jesse is returning to design school in Utah. Over the last few months, Jesse really became a part of our team. We miss him a lot. Kade, our french bulldog, has been moping around since he left, literally jumping up and sleeping on Jesse’s desk during the day. Jesse: thanks for all your contributions, good luck with school, and we hope to work with you again down the road.

Here’s a great pic of Ash on our local rope swing.

Andrew – who just returned from two weeks of wilderness backpacking with his family in British Columbia – has been organizing weekly ‘wim hof’s’ for the entire team. If you’re not familiar with that term, here’s a link Wikipedia. Basically, you walk slowly into freezing cold water until your nipples are underwater, while controlling your breathing, and then you stay put as long as you can. I’m usually the first one out, but Andrew and Ash can stay in for a shockingly long time. This pic is from the White Salmon River, the water temperature is in the low 40s.

If you’re on the Black Rock Desert for Burning Man next week, come find Ash & I either out on the open playa driving around with our mutant vehicle ‘Chairman of the Bored’ or back in camp at Sunset Lounge, which is located in the vicinity of 9:15 & H near Distrikt.

We’ll be out of touch for the next two weeks. See ya on the other side!